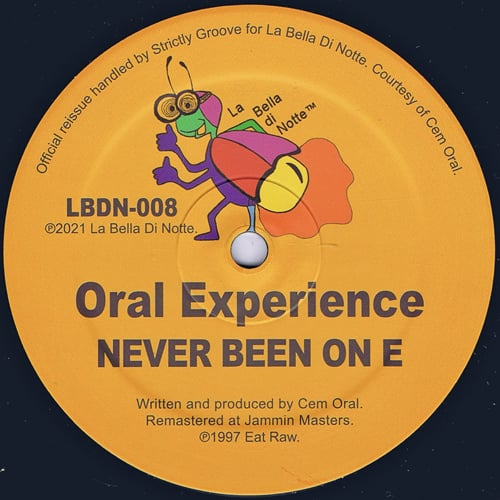 Tracklist:
A. Never Been On E
B. Timbo

A producer with multiple aliases and projects, the sound wizard behind world-recognized mastering studio Jammin Masters and brother of Khan, owner of the legendary New York record store and record label Temple Records. Cem Oral, the aforementioned, raised in Germany by a Turkish father and a Finnish mother, heavily influenced by Jamaican dub and electronic music pioneers, began his career at a tender age playing with four-track recorders and synthesizers, juggling between collaborations with many pop music stars, or as sound-designer of film soundtracks, and in underground solo or group projects, writing some of the most beautiful pages of German and European alternative music in general. At the same time since 1993, he has mastered over forty thousand tracks for countless prominent artists and labels. "Never Been On E" as Oral Experience is definitely an odd release if you know La Bella Di Notte catalog, but probably one of the most representative of his own vision. The reissue comes courtesy of Cem Oral and is fully restored by none other than himself.